The Pens You Would Not Sell

Our pen club, the Vancouver Pen Club, has a theme for each of the monthly meetings. It may be about a brand or style of pen, somethings that forms the focal point for very interesting conversations. This month the topic was: The pen you would not sell.

I crumbled on that question. What pen in my entire collection would rise about the others and be a No Sale, under any option.

But as we we all took our turns showing and talking about this most valued possession a number of themes emerged. Pens became priceless to the individual because of what they meant to the person. The most common theme: it was a gift, the purchase of fixing of it was an accomplishment, and nib was such that writing with the particular pen was an experience above others. 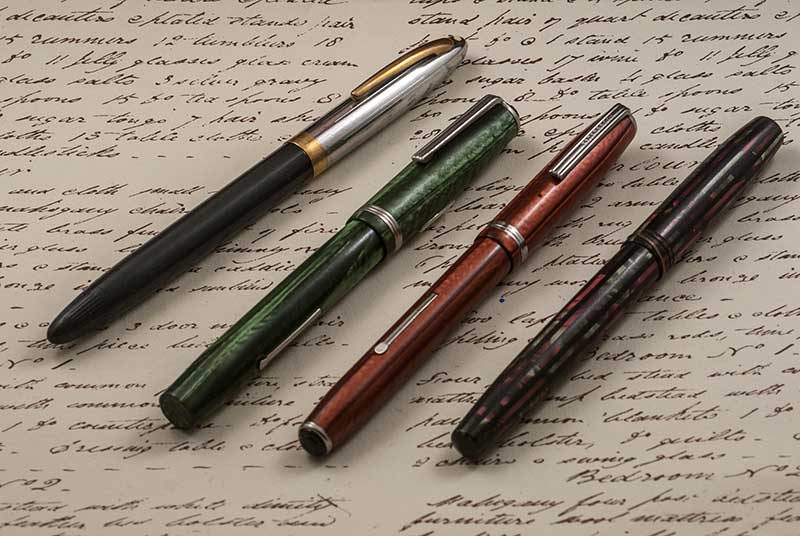 The table below highlights the pens identified and some of the key comments made. Reading from left to right: Pen, F - Fountain, R - Roller, B - Ballpoint. Reason to not sell: G (Gift), E (Experience about getting the pen), N (Nib and writing performance):

So through our discussion, 29 pens were identified as ones the owners would never sell. Fountain pens made up 90%, clearly the predominate type of pen. The pen being a gift was the main reason, with 55% being identified as a gift. And the nib and writing performance was next making ip 45% of the no-sales.

What I took away from the very interesting discussion is the connection each had with their pen. Where the pen was a gift, it typically was a gift from parents or someone in the family, and therefore truly had special meaning. The gifts were really pens passed down to someone in the family rather than friends and acquaintances buying a pen as a gift to give.

Next ranking was the actual writing performance of the pen, always referred to as ... I would never sell this because of the nib. In somecases the nibs were special in terms of a custom style, such as double broad stub. But more often it was just a great performing nib. Wish pen companies would take in that point. The quality of the pen is important.

The other aspect that struck me is that the majority of the pens were what you would say are ordinary everyday pens. The Parker 51. The Pelikan 800. Various Sheaffer lines. Well made basic fountain pens. There were a few of the higher price points such as the Visconti Homosapien, Desert Spring, Aidia or Metropolis; or the Montegrappa Mija; or the classic Cartier Le Must. What was not in the group were the very high end limited editions.

So pen manufacturers take note. Make a good pen, with a good nib, well styled so people will buy it for themselves or as gifts and you have a winner!